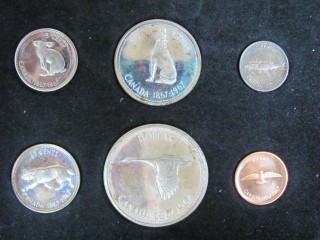 There are few world coin products as popular as the 1967 Canada proof-like coin set. It was among a long-running series of annual proof-like coin sets that contain one example of each denomination of Canadian coins minted in the 1960s, including the one-cent coin, nickel, dime, quarter, half dollar, and silver dollar.

These aren't just any Canadian coins, though. They are the six coins that commemorate Canada's 100th anniversary of confederation. When it was released, the 1967 Canada proof-like set achieved a huge following not just in Canada, but also in the United States. There are several reasons why the 1967 Canadian proof-like set became such a popular collectible.

Most notably, the six coins were redesigned for one year to honor Canada's centennial. Each coin features Canada's iconic wildlife, including the following animals:

The 1967 Canada coins consistently rank among the most beautiful the Royal Canadian Mint (RCM) has ever released. The artistry of the 1967 Canadian coins has even inspired the RCM to reproduce the designs on 2017 Canada coins that honor the nation's 150th anniversary of confederacy.

There are many other reasons collectors love the 1967 Canada proof-like coin set, including:

Coin collecting trends change, yet it seems Americans never really forgot the 1967 Canada proof-like set. While five decades have passed since it was issued, the 1967 Canadian proof-like set remains a favorite collectible that any hobbyist who appreciates classic coin designs and iconic world coinage should add to his or her collection.