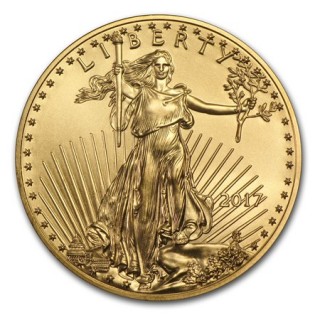 One of the most popular bullion coin series in the world continues with the release of the 2017 Gold American Eagle coins. Available in the usual array of four sizes, the new 2017 gold coins will be available in investor-grade bullion quality or collectors' edition proof. 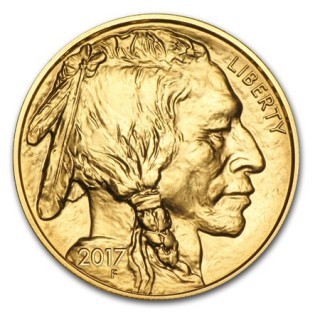 Since their introduction in 2006, American Buffalo gold coins have become a major hit with coin collectors – so much so that people were paying multiples of their issue price just after they were first released. Gold Buffalo gold coins boast a design inspired by James Earle Fraser's Buffalo nickel, which was produced from 1913 through 1938.

Gold Buffalo gold coins contain 0.9999-fine gold and are among the purest gold coins the U.S. Mint strikes these days. While the 2017 Gold Buffalo coins are certain to be hits among coin collectors, the coins' 24-karat gold composition is sure to help win over plenty of diehard bullion investors, too. 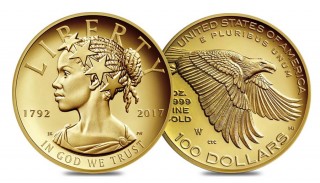 The United States Mint will honor its 225th anniversary by striking a $100 high-relief gold coin featuring Miss Liberty as an African American woman. While not the first time a black person has appeared on U.S. coinage (that color barrier was broken many decades ago when the Booker T. Washington commemorative half dollars were first struck in 1946), this will mark the first time that Miss Liberty has been depicted on an official U.S. coin with distinctly African American facial and hair features.

The U.S. Mint plans to follow up this black Miss Liberty gold coin with more gold coins featuring other diverse faces, including those of Hispanic, Asian American, and Native American individuals. The U.S. Mint has not yet announced many other details on these new Miss Liberty coins or exactly when they will be released. 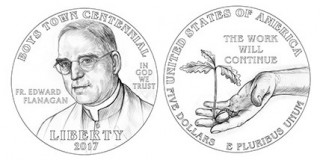 The 2017 Boys Town Centennial commemorative coin series honors the Nebraska-based charity organization that helps children and families during times of need. The United States Mint is honoring the 100th birthday of this beloved organization with a series of commemorative coins to be released in 2017 that include a half dollar, silver dollar, and $5 gold coin.

The 2017 Boys Town $5 gold commemorative coin will be released later in 2017 and feature an obverse design depicting Father Edward Flanagan, a Catholic priest who started the organization in Omaha, Nebraska, in 1917. The reverse of the Boys Town gold coin will include a design showing a young tree sapling sprouting from an outstretched hand. Congress has authorized the production of up to 50,000 Boys Town $5 gold coins.