What’s The Difference Between A Coin’s Face Value & Its Intrinsic Value? 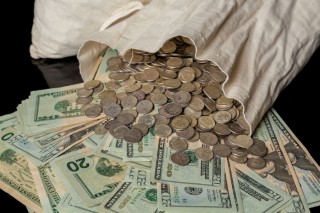 These are all questions I've heard throughout the years, and they're questions I once asked when I first began my adventures in numismatics in the early 1990s. While folks who have been involved with coin collecting might find the answers to these questions fairly obvious, truth be told phrases like face value and intrinsic value are potentially confusing and seemingly interchangeable terms in the minds of many people who are new to the hobby.

Here's a breakdown of what a coin's face value is versus its intrinsic value and how you can remember what each of the terms means.

What is Face Value?

Ever wonder what the face value of your coin is? It's the amount stamped either in numerals or lettering on your coin. For example, on the Washington quarter, the 25-cent denomination of the coin is expressed in the phrase QUARTER DOLLAR, which is inscribed in lettering on the reverse, or "tail's" side, of the Washington quarters made between 1932 and 1998; on quarters made since 1999 the denomination is found on the obverse, or "head's" side of the coin.

In a nutshell, the face value of the coin is its legal tender value, or the amount of money that coin is guaranteed for by the government. A coin is generally only worth less than face value if it mutilated beyond recognition or there is a significant change in the issuing nation's monetary policy. This was notably the case when many nations on the continent of Europe changed from their historic forms of currency to the Euro.

One way you can remember what a coin's face value is? Just think of the amount of money expressed on the coin's face!

What is Intrinsic Value?

A coin's intrinsic value, or bullion value, is the amount of money the metal within the coin is worth. For example, a pre-1965 Washington quarter might be worth only 25 cents in face value, but it contains a 90% silver composition that has a melt value of perhaps $4 or $5 – or more or less based on the current spot price of silver.

Here at CoinValues, we offer silver bullion calculators you can use for each of the major silver coins that have been made by the United States Mint. These calculators can determine the intrinsic value of your silver coins based on the current price of silver bullion. All coins have an intrinsic value, but many coins that are made today consist of metal that is worth only a small fraction of their face value. For example, a copper-nickel clad Washington quarter made since 1965 might have a face value of 25 cents but contain only 3.6 cents' worth of copper and nickel inside. In other words, the base metal of a modern-day copper-nickel clad Washington quarter isn't exactly "worthless," but it's certainly worth a lot less than the face value.

The intrinsic value of a coin can be thought of as the amount of money the metal inside the coin is worth. So, the silver, gold, copper, nickel, or other metal in a coin would be the basis for determining that coin's intrinsic value. On top of all this, many coins also have a numismatic value.

Hopefully you now have a better understanding of the differences between a coin's face value and its intrinsic value. The distinctions are pretty vast and can often mean the difference between a few cents and a few dollars – or much more!

Tags:
Coin Values
Resistivity Meters & PCGS
Wonder What Your Coins Are Worth? Here’s How To Fi...

Esmeralda r Romero
There are no comments posted here yet