Is It Wise To Invest In Rare Coins? 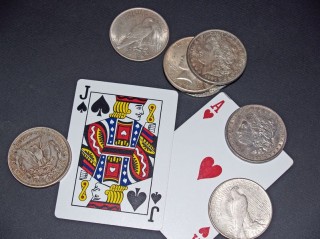 Rare coin investing: no three words in numismatics make me shudder more than these when they are laced together. Countless people enter the world of coin collecting not because they enjoy the art and history behind coins, but because they want to earn a fast buck. It's not entirely the fault of these would-be investors that they believe earning money is easy in coin collecting. Many coin advertisements suggest, or at least indirectly imply, that buying coins is a sure way to earn big profits.

The reality is that money is just as easily lost in buying and selling coins as it is earned. This is readily illustrated by the losses many investors incurred in the early 1990s, when the rare coin market collapsed. Almost overnight, prices on coins such as Mint State Walking Liberty half dollars, Morgan silver dollars, and traditional-era (1892-1954) commemorative half dollars fell by 50 percent or more. In some cases, the values of these coins still have not yet recovered to their 1989 highs when adjusted for inflation.

While many people have made money from buying and selling rare coins over the years, the losses in the coin market around 1990 are an excellent example of what can – and does sometimes – go wrong in coin investing. Investing in rare coins should be seen as no more a guarantee of making money as playing the slots at a casino. Yes, one could make a handsome return on investing their money on a given coin, but chances are they may lose their money over the long run.

Of course, there are many rare coins that have increased in value, such as the 1804 Draped Bust silver dollar – a coin that sold for $990,000 in 1989 and could bring in $7 million or more today. What drives this upward trend in value isn't something intrinsic within the coin itself per se, but rather the presence of buyers in the market who are willing to pay a said amount for a certain coin. If the market isn't there, that $7 million coin might be able to trade hands at only $3-4 million.

Those who are interested in investing in rare coins should do so cautiously, and need to set their investment sights for the long term. Under most circumstances, one can't go out and buy a rare coin with the expectation of selling it only days, weeks, or months down the line for a profit. Remember, coin dealers will only buy coins at 50 to 75 percent their market value, so a coin will theoretically have to increase substantially in value – all the while beating the rate of inflation since its purchase – before one might be able to see a profit in selling it.