Is Now The Time To Collect Susan B. Anthony Dollars? 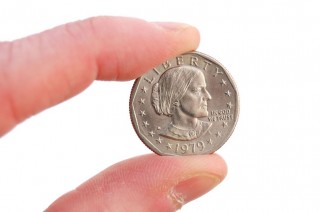 In the year 2000, hopes were high that the public would embrace the new Sacagawea dollar and use it instead of the dollar bill. But most Americans instead clung to their paper money, and by 2002 it was evident that the Sacagawea dollar was doomed to repeat the fate of the Susan B. Anthony dollar. Perhaps numismatists and politicians have learned that no dollar coin in the United States will be successful unless the dollar bill is retired from production – precisely why the Susan B. Anthony dollar (and Sacagawea dollar) failed to gain traction.

35 years on, collectors can still buy Susan B. Anthony dollars for near face value. Perhaps that's because hundreds of millions either sit in U.S. government vaults. The cheap prices of collectible Susan B. Anthony dollars may also be attributed to the scant demand for the so-called Carter Quarter. While the quarter-sized dollar coins, which were originally struck during President Jimmy Carter's single term in the White House from 1977 through 1981, don't command much numismatic attention, that doesn't mean they don't deserve a second look from coin collectors.

Even if categorized as little more than a monetary failure, the Susan B. Anthony dollar nevertheless represents an interesting chapter in modern coinage, and they embody myriad lessons in how the United States could introduce a circulating dollar coin in the future. Beyond symbolism alone, the Susan B. Anthony dollar series has a few interesting collectible varieties.

These include the 1979-P Wide Rim dollar, which sells for around $30 to $35 in uncirculated grades and the 1979-S Type II and 1981-S Type II proof dollars, which carry more defined "S" mintmarks than their respective Type I counterparts. The 1979-S Type II proof dollar has a value of around $65 while the 1981-S Type II commands a premium of around $160. All 1981 Susan B. Anthony dollars were struck only for collectors sets, while the 1999 Susan B. Anthony dollars were excluded from the regular annual uncirculated and proof coin sets that were made that year. The 1999-P proof Susan B. Anthony dollar was sold individually and is now worth approximately $17. There are also many opportunities among the scarce high-grade uncirculated coins grading MS-67 and higher.

For a series that had such a short, largely uneventful run, Susan B. Anthony dollars nevertheless provide many interesting things to keep coin collectors busy. Perhaps their time under the numismatic spotlight will come. Maybe it will be when the series enter its 50s in another 15 or 20 years. Or, if circulating dollar coins ever do gain traction, there could be a resurgence of attention for the Susan B. Anthony dollar, which was the nation's original small-size dollar coin.

No matter the case, if you're interested in collecting Susan B. Anthony dollars, now is the time to buy them . The market has plenty of these coins to choose from, and prices are still in the basement. As the volatile coin market has historically shown with other coins, collectors who waited too long to buy into certain coin series often regret their inaction. Perhaps in just a few years, coin collectors who bought their Susan B. Anthony dollars in 2016, when prices were cheap, may find themselves very happy with their purchases.