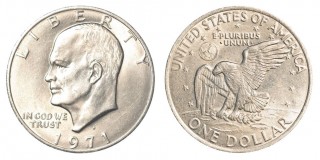 While proof clad Eisenhower dollars and 40% silver Eisenhower dollars in both proof and uncirculated grades are readily available in the top grades, the same cannot be said for the copper-nickel business-strike Eisenhower dollars. Unlike their numismatic-quality counterparts, which were struck with care and were specially preserved in government-issued packaging, the business-strike copper-nickel clad Eisenhower dollars were made by the millions, bagged in large sacks with little regard for surface quality, and sent off to the wilds of circulation. What many coin experts are now better understanding as we march further and further from the 1970s and the Ike dollar era is just how hard it is to find nicely preserved specimens of the circulation strikes.

Unfortunately, large, heavy coins such as the Eisenhower dollar are prone to surface marks and other forms of damage, especially when they are jostled in large sacks containing hundreds, even thousands, coins and transported across the bumpy highways and byways of North America. Today, there are few truly nice specimens left, and those that are still around are worth a pretty penny.

One of the scarcest examples of the copper-nickel business-strike Eisenhower dollars is the 1974 Philadelphia (no mintmark) issue. The Professional Coin Grading Service (PCGS) list just one surviving example in MS-67, and its value is listed as $18,500. The 1976-D Type I (minted in Denver) is also a challenging coin in MS-67. According to PCGS, only six specimens exist in PCGS-certified slabs, and they're worth around $11,500 each. Other MS-67 clad Ikes range in price from about $1,000 for 1971-D specimens in PCGS slabs to nearly $5,000 for a 1972-D dollar. Some issues, such as the 1971 Philadelphia Eisenhower dollar, are known only up to a grade of MS-66 in a PCGS slab and sell for more than $500, with none presently graded by PCGS in MS-67.

What the future holds for the values of clad, business-strike Eisenhower dollars grading MS-65 or higher is still yet to be seen. But what collectors can take to the bank right now is that these 1970s dollar coins are fantastic collectibles worth quite possibly a lot more money than many hobbyists may think.

I think that the Ike Dollar is one of the most beautiful coins and don't get the credits the coin deserve s. I have two bicentennial Ike coins and a 1974 no mint mark that just by viewing all three will almost blind you with a stunning look. I going to send them in to be graded by pcgs and then to a Auction to auction them off so someone else who can love them as much as me can give them a good home and hopefully a home that will display them so people also can enjoy them also. Maybe one of you will purchase them from this 76 yr retired contractor/Pilot. Thanks for reading my message. Joseph Schrum

Joseph Schrum
There are no comments posted here yet