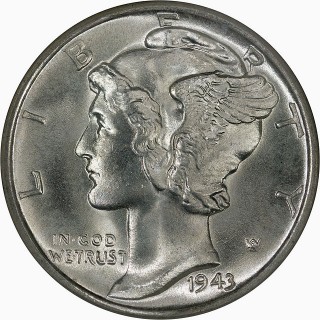 Take a look at the top eBay sales of Mercury dimes from September 2014 and you'll see a good mixture of high-end common dates, circulated key dates, and a few minting varieties. Perhaps most interesting about the Mercury dimes on this list are the number of super-grade pieces – those that grade Mint State 67 or higher.

While the Mercury silver dime is an obsolete series (struck from 1916-1945), they were produced in the era that coin collectors began setting aside rolls of coins virtually fresh from the U.S. Mint. So some pieces – though not very many – survive to this day in extraordinary condition. Certainly the small size and light weight of the Mercury dime means more pieces are found in the higher grades, which are quite unlike the larger and heavier coins, such as silver dollars – many of which were in continuous, jarring contact with contact with each other for decades as stockpiles languished in bank vaults.

High-grade dimes are plentiful at least on this list, and one starts us off on this rundown of eBay’s top 25 Mercury dime sales for September 2014:

The rest of this list includes a couple uncertified and several graded 1916-D Mercury dimes. A few more super-grade Mercury dimes do make the cut for inclusion in the Top 25 list of the most expensive Mercury dimes sold on eBay in September 2014.