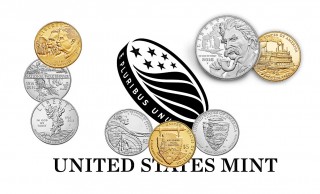 What do great American writer Mark Twain and the National Park Service have in common? They are both being honored on 2016 U.S. commemorative coins. The new commemorative coins are expected to be big hits, especially among fans of Mark Twain literature and those who enjoy the great outdoors.

Mark Twain, who wrote such classics as The Adventures of Tom Sawyer and The Celebrated Jumping Frog of Calaveras County, is being honored on a $5 gold half eagle coin from the West Point Mint ("W" mintmark) and Philadelphia-minted ("P") silver dollar. The gold coin and silver dollar are issued in proof and uncirculated finishes.

The reverse of the $5 gold half eagle depicts a Mississippi River steamboat and the words UNITED STATES OF AMERICA and E PLURIBUA UNUM on the reverse. The reverse of the silver dollar highlights several characters from Mark Twain's stories, including Jim and Huck from The Adventures of Huckleberry Finn, a knight and horse from A Connecticut Yankee in King Arthur's Court, and the frog from The Celebrated Jumping Frog of Calaveras County. The obverses of both Mark Twain coins feature busts of the famous author looking toward the viewer.

Below are current prices for the 2016 Mark Twain commemorative coins: 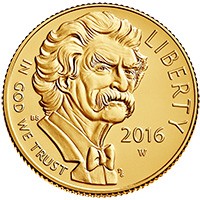 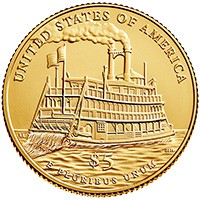 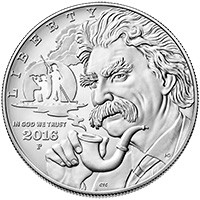 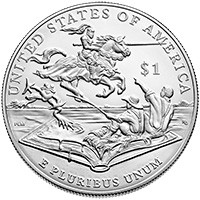 The centennial of the National Park Service is recognized on three 2016 U.S. coins, including a half dollar, silver dollar, and $5 gold half eagle. The $5 gold half eagle, which will be struck at the West Point Mint, profiles naturalist John Muir and President Theodore Roosevelt on the obverse, the latter of whom advocated for the creation of national parks during his early 1900s presidency.

The silver dollar, struck in Philadelphia ("P"), shows the Yellowstone National Park Old Faithful geyser and a bison on the obverse, with a Latina Folklorico dancer on the reverse. The copper-nickel clad half dollar's obverse pictures a young child looking at a frog and a hiker walking across a field, while the reverse of the coin features an enlarged version of the National Park Service logo; the logo also appears on the silver dollar and $5 gold coin. Proof versions of the half dollar will be struck at the San Francisco Mint ("S") and uncirculated pieces will hail from Denver ("D").

Below are the regular prices for the National Park Service coins:

*Prices for the $5 gold half eagles will be announced shortly before their release. 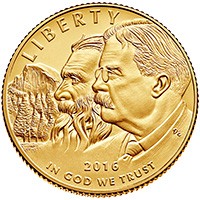 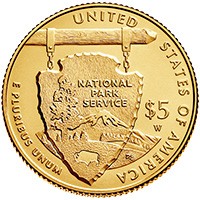 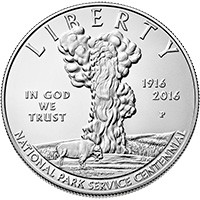 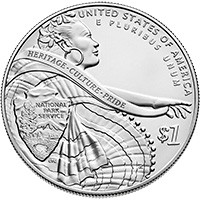 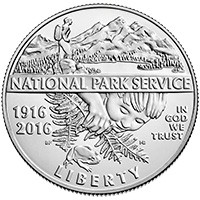 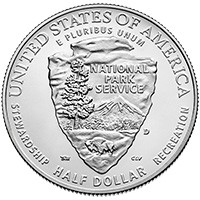