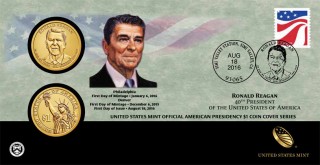 ​The Presidential $1 coin series that began in 2007 with the George Washington dollar is wrapping up in late 2016, and the last coin is winning one for the Gipper – Ronald Reagan, that is. The Ronald Reagan dollar coin has become one of the most popular issues in the series that honors our nation's former deceased presidents. Meanwhile, the concurrent First Spouse $10 gold coin has also come to an end with a portrait of First Lady Nancy Reagan.

About The Ronald Reagan Dollar Coin

The Ronald Reagan dollar honors our nation's 40th president, who served from 1981 to 1989 and helped lead the United States during a transitional period in domestic and global socio-political history. Upon taking office in 1981, Reagan found himself leader of the free world amid the final throes of a gripping 1970s-era economic recession and a period of lingering social issues that were disappearing from the news headlines.

Among the social issues that were still bubbling up on the domestic side were Civil Rights-era race relations concerns and the women's liberation movement, both of which came to a head in the 1960s and 1970s. For example, the last lynching in the United States occurred in 1981, and the Equal Rights Amendment died in 1982 having failed sufficient ratification efforts.

Reagan, meanwhile, had many issues on the international front that kept him busy during his two terms as president, chiefly the Cold War. By the end of Reagan's presidency in 1989, the Cold War was winding down and, just months after Reagan left office, the Berlin Wall, which literally and figuratively divided free Europe from Communist Europe, was demolished.

While Reagan was tending to domestic and international matters, his wife, First Lady Nancy Reagan, was raising national morale by appearing at functions and delivering inspirational lectures at various events. She also attempted to curb the growing drug problem among nation's youth with her culturally iconic "Say No To Drugs" campaign.

Nancy Reagan passed away at the age of 94 on March 6, 2016, just a few months before the release of the half-ounce gold First Spouse $10 coin honoring her; President Reagan died nearly 12 years earlier at 93 on June 5, 2004. Like her husband on the Presidential $1 coin, Nancy Reagan marked the final subject for her respective coin series, the First Spouse $10 gold coins.

The Reagans have millions of fans, many of whom flocked to buy the Ronald Reagan $1 coin and First Spouse $10 Gold Nancy Reagan coin when they were released by the United States Mint on July 1, 2016. They mark the last of the Presidential $1 coins and First Spouse $10 gold coins, and there are presently no extensions planned for either series to commemorate other presidential power couples.

Tags:
Coin Collecting U.S. Mint
The Joys Of Collecting World Crowns
Are 1776-1976 Quarters Worth Saving? What Other Va...