The Susan B. Anthony Coin – Why Did SBA Dollar Coins Fail? 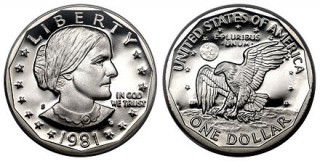 On October 10, 1978, Susan B. Anthony coin legislation was approved, and the first circulating coin honoring the women’s rights pioneer was on its way to production. The Susan B. Anthony dollar represented a downsizing of the dollar coin.

In 1978, when the “Susie B” was approved, the much larger Eisenhower dollar was in its last year of production. Measuring 38.1 millimeters wide and weighing 22.68 grams (copper-nickel version), the Eisenhower dollar was virtually as large as the old silver dollars from early in the 20th century.

Clearly, it would be the only contemporary coin to bear the likeness of a female – something that hadn’t been the case in decades, since the times when Miss Liberty was a staple on coinage. The important difference in that regard, of course, is that Susan B. Anthony was a real person, whereas Lady Liberty is symbolic. As was the case with the preceding Eisenhower dollar, U.S. Mint Chief Engraver Frank Gasparro designed the Susan B. Anthony dollar coin. In fact, the reverse of the SBA dollar features the same design as the reverse image from the Eisenhower dollar coin -- the Apollo 11 insignia.

Why The Susan B. Anthony Coin Fell Out of Favor

Another problem that plagued Susan B. Anthony dollars early on is the fact that the dollar bill was still circulating concurrently with the dollar coin. This is the same reason more recent efforts to circulate the Sacagawea and Presidential dollar coins have also failed.

Following a huge production of some 760 million pieces in 1979, the U.S. Mint stepped back mintage of Susan B. Anthony dollars in 1980, striking only about 90 million dollar coins that year. In 1981, the last year of the original SBA dollar run, just 10 million business strikes were made – all for inclusion in coin collector sets only.

In 1999, the U.S. Mint would strike a little more than 41 million Susan B. Anthony dollar coins to meet commerce demands; in the 1990s, the dollar coin was in use again, with millions of SBA dollars being distributed as change in United States Postal Service stamp vending machines. Sacagawea dollar coins would go into production in 2000.

The 1979 “near date” Susan B. Anthony dollar coin has a value of $20 in uncirculated grades.