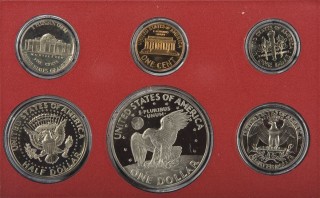 I enjoy collecting United States proof sets. Most are quite affordable, and they offer beautiful lustrous, high-detail examples of U.S. coinage. Most coin dealers offer U.S. proof sets, and many can be bought for less than $10 each, which makes buying them one of the easiest, most cost-effective ways to build a nice collection of U.S. coins.

United States proof sets have been made since the 1800s, and one of the earliest known is a proof set assembled in 1834 for the King of Siam. This proof set contained several rare 19th-century coins, including the 1804 Draped Bust silver dollar – known as the "King of American Coins" by many coin collectors. The United States Mint continued producing proof coins on a regular basis up until 1916, though these proof coins were usually sold on an individual basis.

The United States Mint wouldn't offer proof coins to the public again until 1936, when the first of the so-called "modern" proof sets was offered. The 1936 proof set sold for $1.89 and contains five coins, including the Lincoln wheat cent, Buffalo nickel, Mercury dime, Washington quarter, and Walking Liberty half dollar. Today, gem examples of the 1936 proof set are quite rare and regularly sell for more than $6,000.

The United States Mint ceased making proof sets from 1965 through 1967 to focus its coining efforts on striking circulating coinage, which was sorely needed at a time when silver hoarders caused a nationwide coin shortage. The United States Mint resumed production of proof sets in 1968, but proof set operations were moved from the Philadelphia Mint to San Francisco, which places an "S" mintmark on its proof coinage.

Proof sets produced since 1999 contain many more coins than their predecessors because they encompass the myriad circulating quarter dollar and dollar coin designs belonging to the various coin programs ongoing since the first decade of the 21st century. Some of these proof sets sell in the secondary market for prices equal to or greater than their initial issue prices – a phenomenon owing to the increased interest in these latter proof sets.

Among the proof sets packaged in hard plastic cases, there are format variances that can be seen over the decades. For example, coins in proof sets made from 1973 through 1982 are arranged in a red insert, and the cases are packaged in black cardboard cases with silver cursive script denoting the set within.

Later in the 1980s, proof sets were packaged in purple cases; in the 1990s they were offered in green cases. Since 1999, proof sets have, by necessity of the numerous coins they contain, have been housed in multiple lenses themed to the coins within.

Hobbyists on tight budgets may restrict their proof set collections to those made since 1968 through 1998, a period that marks the cheapest U.S. proof sets in the secondary market. Others may choose to collect proof sets made since the advent of the 50 States Quarters program in 1999. Some coin collectors may also simply choose to start their collections with the current year, or even mark the beginning of their proof set runs with the year of their birth.

No matter how a hobbyist defines their proof set collecting goals, they can be guaranteed of at least this: proof sets are ideal for virtually all budgets and make handsome additions to any coin collection. A great proof set collection could be started for less than $100 and can be further expanded as one's budget comfortably allows.

Tags:
Coin Collecting U.S. coins Proof Coins
5 U.S. Coin Series That Are Cheap To Collect
Why You Should Save Your 1982 and 1983 Washington ...