The Story Of IN GOD WE TRUST On United States Coins 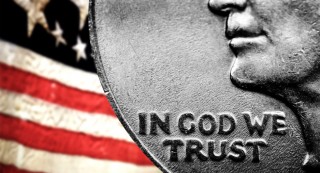 United States coins haven't always featured the famous motto IN GOD WE TRUST. Its first appearance on a U.S. coin came in 1864, when IN GOD WE TRUST debuted on the 2-cent piece following public appeal for our nation's money to recognize the Deity. One such plea came in the form of a letter Reverend M.R. Watkinson sent to Treasury Secretary Salmon P. Chase in November 1861 that proposed the motto "GOD, LIBERTY, LAW."

Secretary Chase and United States Mint Director James Pollock were moved by the reverend's letter and replied, "No nation can be strong except in the strength of God, or safe in His defense. The trust of our people in God should be declared on our national coins."

The minister's letter resonated deeply with Pollock, who recalled a lyric from the fourth stanza of The Star-Spangled Banner. The song, written during the War of 1812, includes the line: "And this be our motto – In God is our trust." Even though the origins of the famous motto In God We Trust had been in existence since our nation's earliest days, adding the phrase to our coins wouldn't be easy.

An 1837 law required Congressional authorization of all new mottoes and devices on the nation's coins. So, the addition of a motto acknowledging God would fall not in the hands of Pollock or Chase alone, but rather occur only through legislation.

In December 1863, Mint Director Pollock proposed either OUR COUNTRY; OUR GOD or GOD, OUR TRUST to appear on the new 2-Cent piece and other coins. Secretary Chase replied to Mint Director Pollock with this suggestion: "On [the 2-Cent coin] with the shield, it should be changed so as to read IN GOD WE TRUST." On April 22, 1864, Congress passed the law permitting the creation of the 2-Cent coin with the motto IN GOD WE TRUST.

Another law passed by Congress on March 3, 1865 allowed the Mint Director to inscribe IN GOD WE TRUST on all gold and silver coins that "shall admit the inscription thereon."

Some U.S. coins made after the passage of the 1865 law didn't carry the IN GOD WE TRUST motto, including two famous gold coins designed during President Theodore Roosevelt's tenure in office from 1901 through 1909.

Because President Theodore Roosevelt didn't want them to.

Roosevelt, who was a devout Christian, believed placing God's name on money amounted to sullying His name, most especially so if the coins were used for illicit purposes. When President Roosevelt commissioned famous artist Augustus Saint-Gaudens to design new coinage circa 1904, the commander-in-chief specifically requested the artist not to include the motto within the designs.

Among these coins Saint-Gaudens designed are the $10 Indian Head Gold Eagle and $20 Saint-Gaudens Gold Double Eagle. During their first year of production in 1907, neither classic design incorporated the IN GOD WE TRUST motto.

The government soon began receiving complaint letters from members of the public concerned about the Godless coins. Congress responded to the controversy on May 18, 1908 by mandating United States coins on which the motto had previously appeared must carry IN GOD WE TRUST. All gold coins struck since July 1, 1908, have subsequently included the motto.

Five Ways To Build A Collection Of Half Dollars