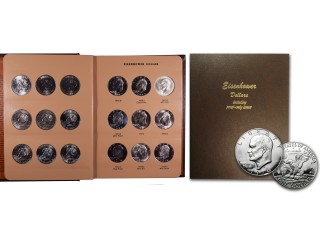 Eisenhower dollar sets are popular among coin collectors who prize the last of the regularly circulating large-size dollar coins. Minted from 1971 through 1978, Eisenhower dollars measure 38.1 millimeters in diameter and are as wide as Morgan or Peace silver dollars. Relatively large, heavy coins, Eisenhower dollars didn't circulate well at a time when inflation was rampant and a dollar didn't have the buying power that it once did. While the dollar coins weren't very popular with the public, they have grown on coin collectors, many of whom quite enjoy building sets of these now vintage silver dollars.

While most Eisenhower dollars aren't really "silver," some of them are; these 40 percent silver dollar coins, which bear "S" mintmarks denoting their San Francisco Mint origin, were sold as proof and special uncirculated strikes and are still widely available today at coin shops. For the most part, Eisenhower dollars aren't rare, except for those coins that represent the very best of the best for their respective issues grade-wise. In other words, "rare" Eisenhower dollars are usually conditional rarities, though there are a few reported errors and other scarce varieties worth collecting.

Generally speaking, collecting Eisenhower dollars requires the assemblage of a straightforward 32-piece set that includes business strikes and proofs. The most expensive pieces tend to be the S-mint 40 percent Eisenhower dollars made from 1971 through 1976, though even these aren't prohibitively expensive and can usually be bought for less than $15 each in standard uncirculated and proof grades. Of course, "supergrade" pieces worthy of inclusion in registry sets can run into the thousands of dollars each and are very difficult to locate.

A very basic set of Eisenhower dollars can be assembled in a Whitman blue folder; that set, which does not include the various 40 percent silver and proof issues, can be cobbled together for mere face value if the coins are acquired from banks and for less than $30 if the coins are bought at a coin dealer. The Whitman folder collection also includes all business-strike issues of the Susan B. Anthony dollar, which was minted from 1979 through 1981 and again in 1999.

No matter how you decide to go about building an Eisenhower dollar set, there are plenty of fun challenges to overcome, such as finding pristine examples of the coins in higher Mint State grades, as well as locating coin dealers that have the specific pieces you need. After all, many coin dealers don't always stock all the various Eisenhower dollar issues. What can be all but guaranteed is that those who complete collections of Eisenhower dollars are sure to enjoy these handsome, large modern coins for years to come.