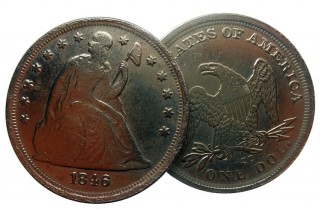 Liberty Seated coins are among the most widely recognized coinage of the mid 1800s, a period when U.S. coin production ramped up and a variety of denominations were in production, including the half dime, dime, 20 cent piece, quarter, half dollar, and dollar. The Liberty Seated design was seen on the reverse of all of those denominations during the 1800s.

The least expensive examples of Liberty Seated coins are found within the half dimes and dimes. Low-grade common dates can be bought for less than $20 each, while quarters and half dollars start at around $30 and up for low-end circulated pieces. The 20 cent piece, struck from 1875 through 1878, costs more than $100 in well-circulated grades.

Collecting each and every date and mintmark combination is virtually impossible for most coin collectors. With the exception of the half dime, every Liberty Seated series, including the 20 Cent coin, has at least one issue that costs five-figures or more even in low, circulated grades. Still, many Liberty Seated coins are quite affordable even for budget-conscious coin collectors, making these classic coins perfect for nearly any numismatist.