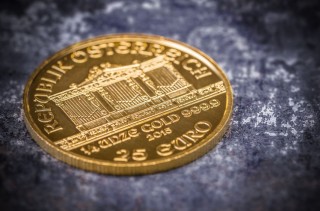 On the obverse of the Philharmonic bullion coins is a Musikverein pipe organ, and on the reverse is an ornate array of orchestra instruments, including a Vienna horn, harp, bassoon, and a fanned arrangement of four violins anchored by a cello. Both the obverse and reverse designs of the coins were created by Austrian Mint Chief Engraver Thomas Pesendorfer.

In 2016, a 1-ounce platinum Philharmonic coin was released with a €100 face value, just like its 1-ounce gold counterpart. While Philharmonic gold, silver, and platinum bullion coinage are legal tender coinage monetized as Euros, these coins are legal tender only in Austria, not within the entire Eurozone as standard for most Euro coins.

One of the world's largest coins is none other than a 1,000-ounce gold bullion coin known affectionately as "Big Phil," a coin released in 2004 for the 15th anniversary of the series. The coin is 37 centimeters in diameter and 2 centimeters thick, measurements that are 10 times the 1-ounce coin's ordinary size. 15 of these Big Phil coins were made, each bearing a nominal face value of €100,000.