What Does 2018 Have In Store For Coin Collectors? 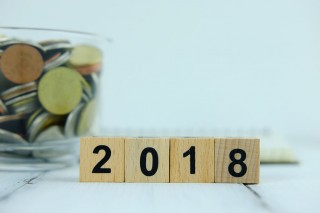 It's a new year, and that means new coins are on their way for collectors in 2018. There's a bevy of new coins in 2018 from the United States Mint, including longtime favorites such as Lincoln cents, America the Beautiful quarters, American Eagle bullion coins, and much more. But it's not just the U.S. Mint with hot new coins – many other mints from around the world have fresh coins and exciting products for 2018. Here's a rundown on some of the many exciting coins coming from the United States Mint, Royal Canadian Mint, Perth Mint, Mexican Mint, and more.

The year 2018 marks an important anniversary for the United States Mint, which marks 225 years since the first official federal coinage was released for circulation. Collectors can celebrate by purchasing 2018 American Palladium Eagle proof coins. The .9995-fine, 1-ounce palladium eagles features the classic Winged Liberty Head (or "Mercury") design by Adolph A. Weinman that appeared on the dime from 1916 through 1945. The reverse design carries a Weinman motif of an American Eagle that was seen on an American Institute of Architects (AIA) gold medal in 1907.

Among the many other offerings you can buy from the United States Mint are 2018 proof sets, 2018 uncirculated coin sets, and commemorative coinage. The 2018 commemorative coins include a 3-coin set (half dollar, silver dollar, and $5 gold coin) honoring breast cancer research and a silver dollar that pays homage to American World War I veterans, the last of whom passed away in 2011.

Also on tap for 2018 are the 1-ounce Yin and Yang pure silver coins featuring colorized motifs of a tiger and dragon, the 30th Anniversary Silver Maple Leaf 2-coin set, and 12-coin Swarovski Crystal Birthstone coin set. These and many other fine offerings from the RCM are sure to keep collectors busy throughout 2018.

Other Cool 2018 Coins To Watch

The United Kingdom will soon be releasing a 2£ commemorative coin honoring the 200th anniversary of Mary Shelley's book Frankenstein. The British Royal Mint will also unveil a 50 pence coin commemorating 100 years of the Representation of the People Act of 1918, which gave women over 30, men age 21 or older, and servicemen as young as 19 the right to vote. Meanwhile, new designs are coming for the 2018 Chinese Panda coins, and the tiny European nation of Luxembourg will issue a 2 euro coin commemorating the 150th anniversary of its constitution.