What Happened to the Canadian Penny? 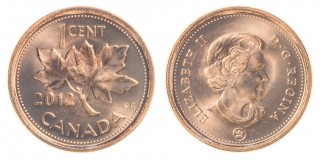 Having a hard time finding Canadian pennies in circulation these days? It's not just you! That's because the last Canadian one-cent coins were made for circulation in 2012. And as they're being spent and turned in at banks, they're winding up at the smelter and disappearing forever.

The Rise & Fall of the Canadian Penny

The first Canadian one-cent coins were struck in 1858 and were the larger than the size of a modern quarter-dollar coin. With rising copper prices and a shrinking purchasing power, the size of the Canadian cent was reduced from 25.4 millimeters to 19.05 mm in 1920. The Canadian cent continued rolling off the presses until 2012. At a few points over the history of Canada's one-cent coin, mintages exceeded 1 billion, the first such occasion happening in 1981 when more than 1.2 billion were made. The most Canadian one-cent coins ever made in a single year came in 2006, when a whopping 1,261,883,000 were struck – not bad for a nation of only 32.5 million in 2006.

Yet, as mintage figures kept rising throughout the years, the relative value of a one-cent coin only kept shrinking, but the cost of making these low-value coins went up, up, and away. To combat increasing production costs, the composition of the one-cent coin was switched in 1997 from 98% copper, balance tin and zinc to copper-plated zinc. In 2000, the composition changed once again to 94% steel, 1.5% nickel, 4.5% copper plating. Even with a continued trend toward cheaper and cheaper base metals, the cost of making a one-cent coin in Canada exceeded the face value of the coin, reaching 1.4 cents and higher.

Finally, in 2012, the decision was made to phase out the penny, a coin whose time had passed, with production costs far exceeding the coin's value. And it wasn't just that. Why continue making a coin that was rarely used in circulation? Most pennies were simply stashed in coin jars, purses, and drawers, forgotten – not to see the light of day until months of even years later.

When the last Canadian cents rolled off the presses at the Royal Canadian Mint in May 2012, much of the public mourned the with sentiment for the coin and its place in society, but relatively few really missed the coin in circulation. It had reached virtually obsolescence years earlier. The Royal Canadian Mint distributed pennies for circulation the last time on February 4, 2013.

Canadian pennies remain legal tender and can still be spent today. But few banks distribute them to customers anymore. In cash transactions ending in an odd amount of change, the amount due is rounded up or down to the nearest nickel, at the discretion of individual merchants.

In a word, no. Even as millions upon millions of Canadian cents are turned over to banks, many of these coins set to be recycled, there are still hundreds of millions of these coins out there. Many reside in coin collections likely never to be spent as money again. There are still countless hoards of pennies in random change jars, cigar boxes, and sauce jars around the country, many of these not likely to be deposited at the banks or spent on services and goods for a long time to come.

Still, you don't find pennies in circulation like you used to, and the number of Canadian pennies you'll find floating around in pocket change either in Canada or the northern fringes of the United States will only continue shrinking still in the years ahead. But as to if Canadian pennies will ever be categorically rare? Likely not in our lifetimes.

Most of the small cents made since 1920 are generally common, with the exception of a few well-known rarities, like the 1923 and 1925 pennies, 1953 Shoulder Fold, 1954 and 1955 No Shoulder Fold pennies. Then, of course, there's the six-figure 1936 Dot cent – one of the rarest and most famous Canadian coins around.

How Can You Find Canadian Pennies Today?

Aside from buying Canadian one-cent coins at coin shops and online auctions, you can still find pennies in circulation. One interesting place to find Canadian pennies in circulation is in the United States, where the Lincoln cent – of equivalent unitary value and roughly identical weight, diameter, and overall physical presence – still circulates. Many US cities along and near the Canada border are hotbeds for those who wish to find Canadian coins in circulation. Of course, you're not bound to find anything truly unusual such as old Victorian-era pieces or the large silver dollars of the mid 20th century. But there are plenty of old Canadian coins to be found intermingling with United States coin if you look hard enough.

In a similar vein, one should buy rolls of pennies from United States banks. These rolls often yield Canadian pennies and represent fertile searching grounds for those who wish to find some old Canadian one-cent coins. As mentioned earlier, some banks still have quantities of pennies on hand and may be willing to distribute them to you if you ask.

Finally, don't forget to ask friends and family if you may exchange money for their pennies. Many people will be more than willing to trade you their jars and buckets of old pennies for equivalent cash. To most non-numismatists, pennies are simply a weighty, tedious nuisance. But to coin collectors like you and me? Pennies are endless FUN! Happy searching!