What’s On The 50 State Quarters? Here’s The Rundown! 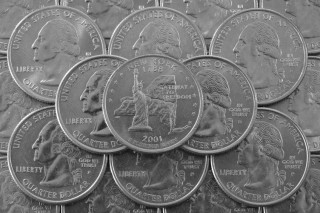 Even nearly 20 years after the first 50 States Quarter was released in 1999, coin collectors still enjoy what became one of the most popular commemorative coin series of all time. The obverse of each 50 States Quarter features a portrait of George Washington, while the reverse design incorporates themes relevant to the given state honored on that quarter. Each of the 50 states was honored on the quarters in the order they were admitted to the Union, beginning with Delaware in 1999 and concluding in 2008 with Hawaii.

One of the many reasons so many folks enjoy collecting 50 States Quarter is the variety of designs and themes on the coins, which include many iconic symbols representing each of the 50 states. Topical collectors, or those who collect coins based mainly on the topics featured on coinage, can find just about anything and everything in the reverse designs of the 50 States Quarters, including food, animals, historic figures, and even planes, trains and automobiles!

Here's a breakdown of some of the incredible designs, iconic symbols, famous people and places, and other fun things collectors can find on 50 States Quarters:

There are at least nine quarters depicting identifiable, historic people, including:

Food On The 50 States Quarters

Did someone say food? Yes, there are several 50 States Quarters paying homage to everyone's favorite topic: food! I won't be counting animals as meat, because I'll categorize them elsewhere further along in this article. Otherwise, foods on the 50 States Quarters include:

Vehicles… In The Air, On The Road, Over The Sea!

You'll find planes, trains, automobiles… and space shuttles(!) on the 50 States Quarters, too! Check this out…

What would great American cities be without their buildings? Architectural design is a common theme on several 50 States Quarters. Here's a rundown of the quarters featuring buildings and other architectural elements:

Who doesn't love the Great Outdoors? The 50 States Quarters offer several designs featuring landscape views, stately trees, and state flowers. Here's a list of the quarters on which you'll find them:

And these are just some of the cool people, places, things, and symbols waiting to be found on the 50 States Quarters. With so many intriguing designs, diversity of topics, and the opportunity to find these coins in pocket change at the mere cost of face value, it's no wonder – nearly two decades on – the 50 States Quarters continue fascinating coin collectors across the United States.