Why Are Carson City Morgan Dollars So Popular? 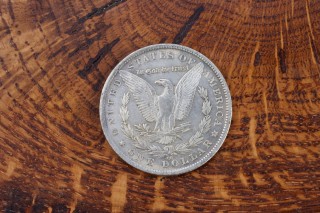 In coin collecting, there are few coins more popular than Carson City Morgan dollars. These old silver dollars from Nevada, bearing a "CC" mintmark on the reverse ("tail's side") under the eagle to denote their origin at the long-defunct Carson City Mint, are widely collected by coin hobbyists and collectively represent the most expensive issues in the long-running Morgan dollar series.

Why are CC Morgan dollars so popular? What makes them valuable? What are the different dates available?

Let's look at the first question, regarding why CC Morgan dollars are collected by so many people. A lot of coin collectors are Americana buffs who own and collect guns, romanticize the days of the free-wheeling Old West, and enjoy buying relics of that long-gone past. Carson City Morgan dollars, which were minted in the 1870s, 1880s, and 1890s – during the height of the Old West, were widely used in cities throughout the Rockies and along Pacific coast. Coins can't talk, so collectors can only fantasize about what those Morgan dollars were used for – maybe buying a drink at an old saloon, settling gun-slung bets, or… who knows what else in the oft-lawless Old Wild West?

Here at CoinValues, we've written a lot about old silver dollars, including CC Morgan dollars. Here's a rundown on the various Carson City Morgan dollars, their mintages, and links for more information about each date:

Indeed, with more than a dozen different CC Morgan dollar issues, there are many options for coin collectors who enjoy silver dollars. Which will you collect? Will you try collecting all of them? Carson City silver dollars offer a unique world of challenges all unto themselves, and collecting CC Morgan dollars is one of the most exciting numismatic objectives around. Good luck!

Streber
There are no comments posted here yet