Why Investing in Coins Pays Off… Sometimes 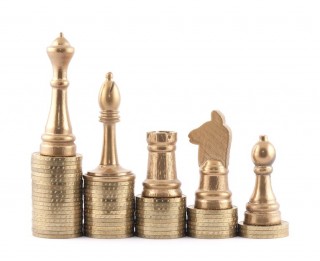 Before I answer any of these theoretical questions, remember there are never any guaranteed investments in coin collecting, and any insight I offer in this post is merely speculative and for informational and educational purposes only. As I've seen over my quarter century in the hobby and, really, as anyone who's been involved with coins long enough would say, the coin market is as unpredictable as just about any other collectibles industry.

Lots of folks have asked me over the years something to the effect of, "should I hang on to my Morgan dollars? Are they going to pay for my kid's college tuition?" My answer, almost invariably, is that there is no crystal ball in coin collecting. Hang onto your coins for a few years, and they might increase in value. Or, they could tank. Who really knows? Morgan dollars have been a top collector item for years, so they're probably a safer bet than investing in, say, new commemorative silver dollars from the United States Mint (modern United States Mint products usually decline in value within a year of their release).

But why are certain coins better buys? Why do others drop in value? The answer can usually be chalked up to good ol' supply and demand. Going back to the example of Morgan dollars for a moment, those coins are actually quite common. For the most part, Morgan dollars were minted by the millions; even after massive meltings in the late 1910s and again around 1980 during the great silver boom, there are still millions available. But there are also millions of numismatists and non-numismatist members of the general public who want Morgan dollars. Thus, there is ample demand putting pressure on available supply, and this creates pressure on the supply of Morgan dollars around today.

Again, going back to my example of the modern-day U.S. Mint products, there are relatively fewer folks interested in buying modern commemorative coins for the long-term. Sure, there are many people buying the coins on a speculative basis from the U.S. Mint and that's why some new Mint products shoot up in value in the days after release. But notice what happens after six months, 12 months pass – those same coins often trade at or even below their issue price.

Because people dump their Mint products after a few months once the hype surrounding those coins peters off, and the market becomes saturated. Soon, the secondary market has a larger quantity of those coins than it can really absorb, and prices on the new coin deflate.

I've seen it happen with almost every U.S. Mint product issued since I began in the hobby back in the early 1990s, save for a few rare cases when new coins actually increased in value and then stayed valuable. Take, for example, the 1995-W American Silver Eagle or 2012 United States Mint Set.

If you believe falling market values is something that affects only new coins, think again. One of my all-time favorite coins, the 1909-S VDB Lincoln cent, has also dropped off in value over the years. When I began in the hobby back in 1992, a 1909-S VDB Lincoln penny cost around $300 in a grade of Good-4. Fast-forward to 2009, the 100th anniversary of the Lincoln cent, and the value of that same 1909-S VDB cent increased in price close to $800. By 2016, the retail price of a 1909-S VDB cent in Good-4 had settled closer to $650. That's not a tremendous decline in value, but nonetheless it's a surprising twist in the tale of a coin that is one of the most popular, most widely known rarities in the coin world.

What happened? Largely, the United States recession of 2007-2009 and the economic fallout that followed caused many collectors to sell their rare coins, and they did so in a financial climate in which relatively few people could afford to buy rare coins. So, the value of the 1909-S VDB penny and the prices of many other coins also fell. Will the 1909-S VDB cent increase in price again someday? I can't say. Probably – it's a coin that a lot of people want, and the American economy is doing better as I write this. But only more time will tell if the 1909-S VDB penny and other rare coins return to their pre-recession levels.

What it all comes down to is this: investing in rare coins is a gamble. Plain and simple. Yes, long-term trends show rare coins are a generally good investment, especially if they are held long enough – say 10 or 20 years. Even better? 25 to 40 years. But none of those price increases are guaranteed, and there is not really any such thing as making a fast buck in rare coins.

Rare coins are a good investment in some cases, and for some people. But they aren't always going to be your best return on the initial investment. My advice is to buy the coins you like, and purchase the very best example of the coins you like. Hang onto them long enough and you might be able to sell them for than you paid and even beat inflation to boot.

Tags:
Investing U.S. Mint
Why Were Some $20 Double Eagles Struck Without The...
We Need To Get More Kids Involved In Coin Collecti...