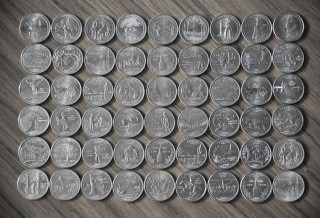 While the Standing Liberty quarter short set mentioned above is certainly less expensive to build than collecting one example of each different issue from the entire series, it could still cost several hundred dollars to assemble even that abbreviated collection. So, in this post we'll examine some of the best coin short sets that can be assembled for less than $100 each – an amount that is financially feasible for many coin collectors, even those on relatively restricted budgets. You'll be amazed at all of the fun coin collectors can have spending only $100 on building short sets.

Here are five short sets that can give collectors the most numismatic bang for their 100 bucks:

This particular range of years corresponds to the Whitman coin folder #9030, which accommodates Lincoln cents made from 1941 through 1974. This particular coin folder has been popular with generations of coin collectors because it's one of the least expensive coin folders that can be totally filled. Additionally, until as recently as the 1970s and even the early 1980s, this Lincoln cent short set was still reasonably easy to complete from circulation finds alone.

While it may be infeasible (but not impossible) to complete this set from searching through your pocket change, the coins are still cheap. The set includes both Lincoln wheat cents (struck from 1909-1958) and Lincoln Memorial cents (made from 1959 through 2008); the set also entails the 1943 steel cents. So, the 1941-1974 short set entails a relatively interesting spread of designs and varieties. In circulated condition, all of the necessary coins to finish this album can be bought for under $20 from a coin dealer. Coin collectors who prefer uncirculated Lincoln Memorial cents (made from 1959 through 2008) can fill the 1941-1974 Lincoln penny Whitman album for under $30.

Jefferson nickels are among the easiest, cheapest U.S. coin series to collect. Part of this is due to the lack of interest in the series. Another component owes to the relatively little change the series has seen since it was first introduced in 1938. One of the most significant modifications to the Jefferson nickel happened during the early and mid 1940s, when the U.S. government removed nickel from the coin's composition to save the metal for production of artillery during World War II.

This resulted in the creation of the so-called war nickel. Struck from 1942 through 1945, Jefferson wartime nickels contain a composition consisting of 56% copper, 35% silver, and 9% manganese. Wartime five-cent coins are easily distinguishable from regular nickels thanks to the presence of a large mintmark over the dome of Monticello on the reverse of the coin. In fact, the 1942-P nickel marks the first time the U.S. Mint in Philadelphia ever used a "P" mintmark. There are 11 coins in a basic wartime set, which can be assembled in circulated grades for less than $25. It is possible to complete an entire 11-coin wartime nickel short set in uncirculated grades for under $100.

Carrying on with the World War II theme, another popular short set consists of the wartime Mercury dimes made from 1941 through 1945. Numismatically speaking, there is absolutely nothing different about the metallic composition or overall design of Mercury dimes from the 1940s versus those of the 1930s or earlier. But many coin collectors, especially those with patriotic inclinations, find the image of Miss Liberty on coins made during wartime to be an especially important statement.

There are 15 different regular-issue coins in a 1941-1945 Mercury dime short set – 16 if counting the 1945-S Micro S variety. None of the coins mentioned here is rare, and the entire set can be assembled in average circulated grades for as little as $55 to $60.

While many people collect the 50 States Quarters as its own series, they are technically part of the long-running Washington quarter series, which began in 1932. Therefore, a 50 States Quarters collection is technically a short set within the framework of the Washington quarter series. The 50 States Quarters, which were released from 1999 through 2008, consists of 50 different reverse designs, with each honoring a particular state. Each design was released in the same order that each of the 50 states was admitted to the Union, beginning with Delaware and ending with Hawaii.

Many people are fond of collecting the 50 States Quarters straight from circulation, which is a feat that can be completed for the face value of the coins in the series. That would be $12.50 if only one example of each design is collected from pocket change and $25 for the Philadelphia- and Denver-mint versions of each coin; the P-D collection totals 100 quarters. If you prefer your 50 States Quarters in uncirculated grades, a 50-coin set can be bought for as little as $30 to $35 and the 100-coin P-and-D set can usually be bought for less than $60.

There are many other coin short sets that can be finished for less than $100, including the collection of business-strike copper-nickel clad Roosevelt dimes (1965-present) and silver Kennedy half dollars struck from 1964 through 1970. No matter what coin short set you choose to complete, building a small collection of coins from a popular series may serve as a springboard toward eventually collecting the rest of the coins in that series.

Tags:
Coin Collecting
Is Now The Time To Collect Susan B. Anthony Dollar...
5 U.S. Coin Series That Are Cheap To Collect