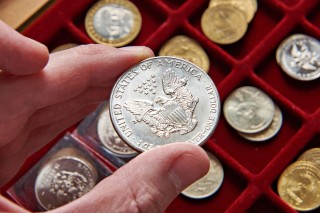 That's how I collect American Silver Eagles, too.

Why do people such as me collect silver bullion coins? There are at least four reasons I enjoy collecting silver eagles, including the following:

One thing's for certain: there are plenty of American Silver Eagles to go around. Virtually every date going back to 1986 is pretty simple to locate at your local coin dealer. If the nearest coin shop doesn't have a certain date that you're looking for, I'll pretty much guarantee you'll find it in a heartbeat online. Even the 1996 American Silver Eagle, the scarcest of uncirculated ASEs, is quite widely available. You'll just need to pay more for it since it's far less common than other dates in the American Silver Eagle series.

Let's face it – there's an allure to collecting American Silver Eagles not only for their gorgeous design but also because each coin contains a full ounce of silver. This is one reason these coins appeal to bullion investors and silver stackers. Even numismatists, who collect coins with an eye toward historical and collectible value, find pleasure in owning coins with a hefty amount of silver in them.

#4 - Get Tired of Collecting Silver Eagles? They're Easy to Sell!

Most coin collectors focus on building a certain set of coins for a while and then, when they finish that set or tire of the objective, they sell their coins and move on to the next coin collecting goal. Some coins are harder to sell than others. I can assure you that American Silver Eagles are one of the easiest coins to unload. The silver bullion market is active virtually 24/7, and there's always someone who ready and willing to buy your American Silver Eagles.