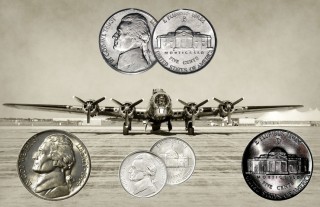 Silver Wartime nickels are popular coins among collectors who appreciate history and enjoy 20th-century United States coinage. The 35 percent silver five-cent coins are colloquially referred to as "Wartime nickels," though they contain no nickel at all. Nickel, which was temporarily removed from the five-cent coin during the period 1942 through 1945 for use as military artillery in World War II, was replaced with an alloy consisting of 56 percent copper, 35 percent silver, and 9 percent manganese.

Circulated Wartime nickels have a distinctive darker color than regular nickels (which actually contain 75 percent copper and just 25 percent nickel). Though perhaps the best visual clue for distinguishing silver five-cent coins from those containing the typical nickel-based composition is the location of a large mintmark above the dome of Monticello on the reverse of the coin. In fact, the 1942 Wartime Jefferson five-cent coin was the first piece to ever be made with a "P" mintmark signifying Philadelphia.

In terms of overall silver content, Wartime nickels contain among the lowest amount of silver in any U.S. coin, with just 0.056 ounces of silver per coin – less than the 90 percent silver dime, which contains 0.072 ounces of silver in each coin. This helps make the Wartime silver five-cent coins very affordable for those who want to buy silver bullion at a very low price.

What's more, Wartime nickels represent a great series for coin collectors who want to assemble a set of historic coins from an important time in United States history. The entire 11-coin set of Wartime Jefferson nickels (counting only regular issues) can be assembled for less than $20 in circulated grades and for as little as $100 in uncirculated grades.

Most United States coin dealers sell Wartime nickels and usually sell circulated pieces for close to face value. Uncirculated specimens can generally be bought for $5 to $10 each, save for the high-end certified Mint State coins, such as those with Full Steps designation.

Those who wish to house their Wartime nickel collection can find a range of affordable coin holders specifically designed for housing the 11-coin set. One of the most popular coin holder manufacturers, Capital Plastics, offers an array of plastic cases, including their deluxe Lucite holders and more affordable snap-lock cases.

Tags:
Silver Coins Jefferson Nickels Coin Collecting
What Could the Current Gold to Silver Ratio Mean f...
What is Causing the Increase in Gold Bullion Deman...