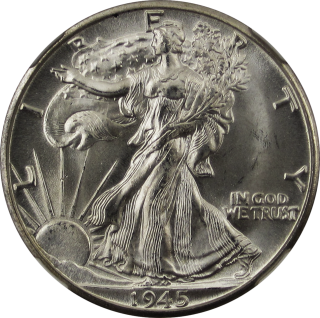 The Top 25 most expensive Walking Liberty half dollars from November 2014 show a surprising mixture of dates for the month, including several early dates, multiple key coins, and even numerous high-end proof and uncirculated specimens. The top coin for the month sold for more than $9,000, while the least expensive of the Walking Liberty half dollars sold in November 2014 traded hands for $835 – so, there’s quite a spread in price among the coins we’ll look at here.

It’s no surprise that Walking Liberty half dollars receive attention from a wide segment of the coin collecting world, as these coins have long been considered as one of the most beautiful silver coins the U.S. has ever produced. Combine that with the fact that they are a popular coin type to collect by date and mintmark, and these coins show themselves as true winners in both the numismatic and investment senses.

Here’s a look at the Top 25 Walking Liberty half dollars sold in November 2014 on eBay:

Rounding out this Top 25 most expensive Walking Liberty half dollar list are a motley crew of circulated, Mint State, and proof Walkers representing both scarce and common dates. Interestingly, the vast majority of the certified pieces below are PCGS coins, perhaps inflating the final price for each of those listings by an additional 5 to 8 percent over what they would have otherwise fetched.