An unexpected modern rarity has emerged as a result of the impact of the coronavirus pandemic on production of the U.S. Mint's flagship silver bullion coin series, the American Silver Eagle.

Most production of American Silver Eagle bullion coins is done at the U.S. Mint's West Point Mint and sometimes at the San Francisco and Philadelphia Mints too.Because of recent temporary closures at the latter two minting facilities due to safety and health concerns related to the coronavirus the U.S. Mint had its Philadelphia facility supplement production of the very popular bullion silver coins as needed to meet demand and fill gaps in production and logistics.

According to documentation from the U.S. Mint, those American Silver Eagle coins were struck between April 8 and 20, and monster boxes of 500 such coins were all packaged manually for the Mint's network of Authorized Purchasers, who purchase the coins directly from the United States Mint and then sell them retail and to other dealers.

Demand for American Silver Eagle bullion coins has exploded during the pandemic as investors have flocked to silver coins – the most popular and widely traded coins in the world being the American Silver Eagle. This year demand for the coins has risen strongly compared to the last couple years in response to lower spot silver prices and safe haven demand from the massive economic dislocation cause by the pandemic.

The 2020 (P) Silver Eagle coins made at the Philadelphia Mint are physically indistinguishable from coins made at other mints, and they do not carry mint marks indicating where they were struck. Instead, when graded they are given parentheses around the P, i.e., (P). In addition to this NGC and PCGS are including "Emergency Release" and "Emergency Issue" respectively on their certification labels.

The coins made at the Philadelphia Mint can be identified by hand-written labels and markings that are affixed to Monster Boxes of such coins and which include tracking numbers that correspond to which mint produced the coins.

Using those numbers, it was determined that 240,000 2020 (P) Silver Eagles were struck at the Philadelphia Mint. 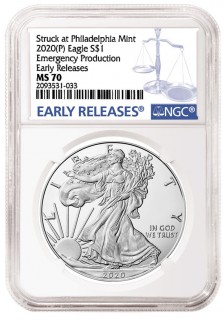 To be eligible to be identified by NGC as 2020 (P) American Silver Eagles, coins must be submitted to the grading service in unopened Monster Boxes with the correct handwritten labels and markings.

PCGS and other grading companies soon after issued similar announcements and offer similar labels for coins that meet the criteria.

Current production of other U.S. bullion coins and collector issues is being impacted by the temporary shutdowns and reduced operations at minting facilities, but no other specific information has been provided about which mints are making how many coins.

In addition, Mint officials stated that production of American Silver Eagles and 5-ounce America the Beautiful coins would continue to be produced during the temporary suspensions of operations, while American Gold Eagle and American Gold Buffalo coins, which are only made at West Point, were not made during the shutdowns. The 5-ounce ATB coins are only produced at the Philadelphia Mint.

The rarest American Silver Eagle is the "2015 (P) Struck at the Philadelphia Mint Silver Eagle," which has a mintage of 79,640. That coin has recently sold in examples graded MS69 in the $500-600 range on eBay if graded by NGC or PCGS, and for several thousand dollars or more if graded by the same companies in MS70.

To date only about 7% of the mintage of the 2015 (P) coin has been identified and graded by the two leading grading companies along with some more by ICG and ANACS.At PCGS, 772 coins have been graded MS70, and 2,105 have been graded MS69. At NGC, a mere 103 have received an MS70 grade, while 2,333 were graded MS69 and several more coins received lower grades.

The issue of identifying bullion Silver Eagles made at different branch mints first came up in the early 2000s when the Mint had to supplement production of Silver Eagles at the West Point Mint with production at the San Francisco Mint in 2011 as demand rose. Until 2014 the nylon strap around monster boxes indicated which mint produced the coins inside, but that practice was then discontinued.

In 2015 bullion Silver Eagles were produced for the first time at the Philadelphia Mint.

In 2017 the Mint received a Freedom of Information Act request to clarify which mints produced which year's coins.

Around the same time officials at NGC were noticing patterns in the serial numbers on monster boxes of eagles as well as differences in the quality of the coins. They said in 2017 that those coins made at West Point according to the serial numbers were of higher quality than the ones made at the Philadelphia and San Francisco Mints, which only used manual tubing of coins, while the West Point Mint used both robotic and manual tubing. Robotic tubing increases the quality of the coins because they do not come in contact with each other as much as with manual tubing.

NGC filed a FOIA request of its own. In response to those requests, in March 2017 the Mint provided a breakdown of which mints produced how many coins from 2014 to 2017.

The Mint is not believed to have had to produce Silver Eagles anywhere except at West Point in 2018 and 2019 because there was a decline in sales during those years.

Bullion Shark has a handful of the 2020 (P) Silver Eagles in stock. Click here to get yours while you still can!