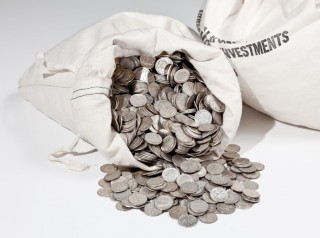 Junk silver coins are what many coin collectors and bullion investors buy when silver prices start getting jumpy. This has been happening as of late with silver bullion values fluctuating between $13.85 and $15.50 per ounce, though historically this has occurred many times, during which coin buyers hoard pre-1965 90 percent silver coins when metals prices either decrease or increase to a substantial degree. In 1980, for example, millions upon millions of common silver dimes, quarters, half dollars, and dollar coins were melted when the price of that bullion metal reached nearly $50 per ounce. The same thing happened again in 2011, with countless silver coins heading for the smelter as the price of silver nearly touched the important $50 mark.

But why are junk silver coins so popular among bullion investors, and are they any better than American Silver Eagle coins, silver ingots, silver rounds, or other stores of precious metal? Here's a look at four pros and four cons of buying junk silver coins: