The Joys Of Collecting World Crowns 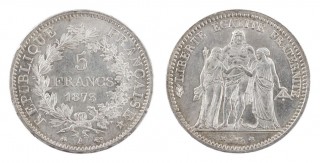 I, like many other coin collectors, enjoy world crowns. They're beautiful coins with high silver content and relatively affordable prices.

By no means are crowns an economically efficient vehicle for buying bullion – silver bars and traditional bullion coins are, gram for gram, cheaper for silver stackers by far. Still, world silver crowns are among the most popular coins among diehard numismatists and those who enjoy silver bullion coinage. Indeed, it's rewarding to collect world crowns!

What is a Crown?

As with many areas of coin collecting, there are no specific requirements dictating what constitutes a crown. There are, however, some widely accepted standards.

It's numismatically agreed that world crowns generally measure between 35 millimeters and 42 millimeters in diameter. Silver coins that are categorical crowns also generally weigh around one ounce, give or take a few grams. In most cases, a crown represents the unitary denomination of the nation in which it was produced, such as the Canadian silver dollar, the Mexican peso, and the Japanese yen. In this sense, United States silver dollars, such as the Morgan dollar and Peace dollar, also qualify as crowns.

While the term "crown" is often used in a generic sense, the crown, in origin, is a British silver coin that arose in the 16th century and originally had a value of five shillings. Today, a British crown is worth pounds.

Many world mints have since patterned their largest circulating silver coins (and, more recently, copper-nickel coins) off the model of the British crown. Often, the most beautiful designs are reserved for the large silver coins of the world, and yet they largely remain inexpensive for collectors today. For this reason, world crowns are an attractive pursuit for a broad range of numismatists.

What Are Some Of The Most Popular World Crowns?

While every coin collector has his or her own preferences as to what constitutes a crown, some may collect both standard-issue and bullion issues while other focus on only one or the other. Personally, I restrict my crown collection to only numismatic issues – coins that are made for general circulation or collector purposes and not strictly produced as bullion pieces. Those who include bullion issues as world crowns may collect American Silver Eagles, Canadian Maple Leafs, British Britannias, Austrian Philharmonics, and Mexican Libertads.

Here's a list of a few of the most widely collected world crowns:

This list represents but the very tip of the iceberg when it comes to the wide variety of silver coins that are counted among the body of world crowns. Of course, the copper-nickel variants of these coins, when applicable, can also be included.

World crowns are easy to collect, especially nowadays, when they are widely available from online coin dealers and auction websites such as eBay. Still, I prefer checking with my local coin dealer to see what he has in stock, because I like being able to inspect the coins in-hand before I buy them.

At the end of the day, you need to collect the coins you enjoy. The beauty of collecting coins is that there are no rules. A world crown coin collection is an incredible and symbolic example of the open borders, literally and figuratively, within our hobby.

Joshua McMorrow-Hernandez is a freelance writer and author who has contributed hundreds of online articles and blog posts, as well as published Images of America, Tampa’s Carrollwood (Arcadia Publishing, 2013). Joshua is interested in a wide array of topics, and since 1992 has been heavily involved in numismatics, a topic about which he loves to research and write. His main area of focus is 19th and 20th century United States coins, but he also enjoys Canadian coins.
Comment for this post has been locked by admin.